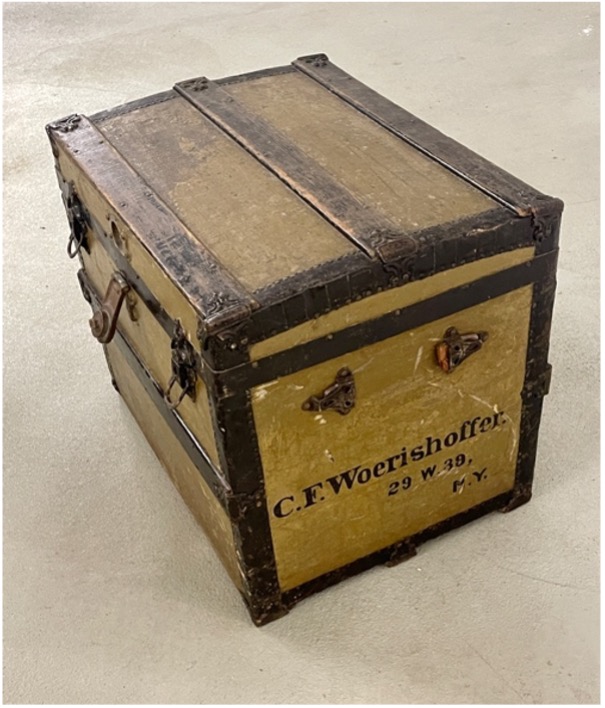 When Uncle Antoine died in 1979, he left an old trunk belonging to his grandmother, Anna Woerishoffer (born Uhl). He probably had never inspected the contents and it came to me because nobody else was interested.

Although AW died in 1931 a further 20 documents with later dates and not directly related to the family, were also in the trunk.

The beginning of our family’s “modern” era began when Jakob Uhl and his wife Anna (born Behr/Sartorius) set foot in Manhattan around 1836.  It was the start of an adventure that took the family from poverty to the pinnacle of power in one short generation.

It was truly the American Dream.  How it later unfolded is another story.

When I grew up, family history was never discussed and we were only told that the family’s good fortune came from the New Yorker Staats-Zeitung, a German-American newspaper. That happened not to be true.

Anna and Jacob Uhl bought the Staats-Zeitung in 1845, however it would never become part of our inheritance.  When Anna (then married to her second husband Oswald Ottendorfer) died in 1884, half the shares went to her son  Edward and the remaining half to a trust for her three grandsons, Hermann, Oswald, and Manfred Uhl, minor children of her deceased eldest son Hermann.

Our good fortune came about when CFW, who also immigrated to the United States at a very early age, worked his way to become one of Wall Street's great investors (VIPs  >  Charles F. Woerishoffer  >  Fifty Years in Wall Street by Henry Clews  >  Chapter XL).

CFW died in 1885, aged 42, leaving behind a widow, two young daughters, (grandmother Antoinette and her younger sister Emma Carola) and a colossal fortune.  Both girls chose different lifestyles, and both their lives ended in tragedy when they were still young.

The family history is best understood by opening Timeline for a clear picture of who was alive when, and why certain events directed the course of our family:

• The untimely death of Charles F. Woerishoffer,
• Carlo Seilern’s marriage to Antoinette Woerishoffer at a time when there was no dominant male to control a situation which quickly got out of hand.
• Antoinette Seilern’s death at the age of 25 a few days after giving birth to Uncle Antoine in 1901.

All this is well documented, but easily understood when consulting Timeline.

Impressions contains much interesting information.  Here are some excerpts:

• Anna Josepha Behr (Sartorius) left Wurzburg, Germany in 1834 for New York with practically nothing to her name.
When she died 50 years later, aged 69, her funeral was judged by the New York Times to be the largest ever held for a woman in New York City.  The flags at City Hall were flown at half-mast and over two hundred carriages joined the procession.

• By the death of Charles F. Woerishoffer in 1886, Wall Street lost one of the most prominent figures which has ever shown up here.
CFW was our direct relative (my great-grandfather) and only 41 years old when he died.

VIPs offers insight into the distinguished lives of certain family members such as Emma Carola Woerishoffer and Uncle Antoine.  A few scoundrels have also been included.

Publications includes the complete transcript of “Some Seilern Memoires” a book written by Paps' only first cousin, Jossleyn Hennessy.  It explains family history from Johann Friedrich Seilern (1645 – 1715) to Hugo Seilern (1840 – 1886) and is probably the only source of available information.

Selected items from “The Amazing Marriage”, another book by Jossleyn Hennessy, can also be found under Publications.  Both have been translated into German.

Finally, the sorry and yet unresolved disappearance of my cousin Philippa’s estate left to her by Uncle Antoine.

Although I spent four years investigating the matter and collecting valuable information, I was unable to penetrate Liechtenstein foundation laws which prevent any form of oversight.  It will probably take a further couple of years before finding out what really happened.  Maybe never.

Everything I was able to find is detailed under “Publications  -  philippaseilern.ch website”.  It’s not pretty.

This website may contain factual errors, mostly in Trees & Charts which have not been regularly updated.  Corrections should be sent to “”.

Note.   The home page is a painting of Kitzbühel by Alfons Walde (1891-1951) and was painted from practically the same spot where Haus Seilern now stands.

• The website is open source, except for  "Family"  which requires a username,  a password and an e-mail address,
• Important documents are available not only in html, but also in PDF format.
• Mostly in both German and English,
• The site is better viewed on a desktop device than on an iPhone.

• The following inflation calculator may provide help in understanding today’s value of some of the figures involved:  officialdata.org